Negotiating downtown Johannesburg and its bus stations without getting mugged had been a very harrowing experience, and I was just glad to be on a van-bus out of the capital and heading to Lesotho, the cool mountain-nation completely encircled by South Africa.  On that voyage I met a young woman who lived in Johannesburg but was on her way to visit her brother in Maseru, Lesotho, where he ran the café at the French embassy.  She explained that they were a family from what is now Eritrea who had migrated to southern Africa.  In her childhood Eritrea was still a part of Ethiopia and her father had a prominent governmental role and was a very successful businessman.  However, during Eritrea’s independence struggle he backed the wrong side and was punished by having his assets stripped and  being banished from the country. During our drive I shared stories of my travels through Ethiopia and we made fast friends as I noticed a malaise overcoming me with a persistent headache.  As we crossed the border she called her brother and offered to have me stay with him while I was in Maseru.

He agreed, though by the time we arrived I was starting to feel very fatigued.  Her gracious brother set me up on a mattress in the living room and took me for meals at his café and another small restaurant he co-owned.  That night I became quite ill with fever, chills, weakness, vomiting, and headache, and felt terrible imposing on his hospitality.  However, as weak as I had become, I realized that I would never be able to take care of myself.  Not missing a beat, he took me to a good private clinic that suspected malaria (given that I had been in Burkina Faso 10 days prior) and sent off a malaria test across the border to South Africa.  As we awaited the test results for 24 hours he remained vigilant in his care for me, coming home during his lunch breaks to check on me, and bringing food, drink, and medications.  When we received my diagnosis confirming malaria, he then drove me to the pharmacy and helped me to get the most efficacious malarial medication (the doctor had prescribed the wrong treatment owing to the fact that she had had no experience with malaria because Lesotho had virtually none).  I ended up staying in his home for an entire week as I slowly recovered from a rather severe malarial infection.  Incredibly, his care and kindness toward me allowed me to overcome my concern for imposing on his hospitality. He helped me feel welcomed, as though I was not a burden to him.
​
As I recovered and was able to walk and eat he took me to his café again where now I felt like an honored guest. He even refused to accept my payment.  I am forever grateful to him not only for the great care he took of me, but also for teaching me about the sacred honor and duty of nurturing those in need and about selflessness as a highest human quality.
​     -Mark 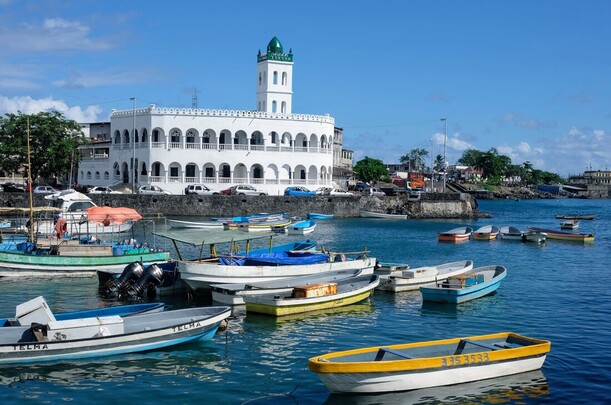 Arriving at Moroni International Airport is unusual because there are no ATMs or money changers. The national currency is the Comorian franc, although Euros are also widely accepted. When we arrived we only had €20 notes that we had managed to get out of an ATM in the Dubai airport. There were a couple of people offering very overpriced rides into town, but we knew taking local transportation would be much cheaper. We found one guy who let us into his van, knowing we only had the €20. He brought us where we needed to go, and when we offered him the money, he waved us off, not even attempting to make change. Instead he just let us ride for free. 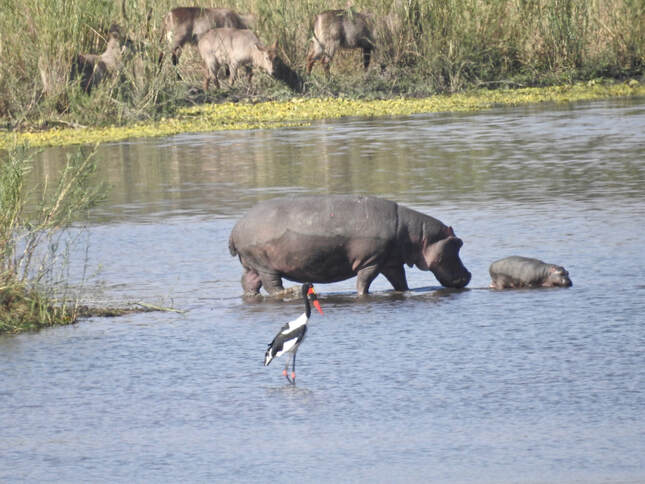 The local wildlife. Photo by Vicki Gorham.
Zambian side of Victoria Falls
​2007

On our first trip to southern Africa, we needed a ride from Victoria Falls to our lodge, and some local Zambian men offered to give us a ride in the back of their ancient pick-up truck. We climbed into the back with several men but had not gone far when the truck broke down. We all climbed out to push and then had to quickly jump back in when it started up again. We were all still laughing and joking when we got to our lodge, and the driver refused to take any reimbursement, just waved and thanked us for our help in pushing the truck.
​     -Vicki Gorham 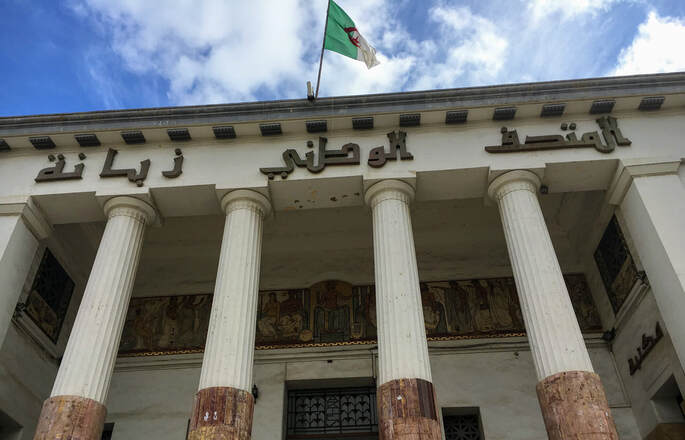 Ahmed Zabana National Museum. Photo by Elizabeth McCarthy.
Oran, Algeria
15 January 2018
​
We were at the Musée National Zabana d’Oran (Ahmed Zabana National Museum). When we got to the lowest floor, the security guard excitedly rushed over to greet us. He proceeded to show us around his floor, pointing out his favorite things. Although we didn’t understand every word of his explanations in French, his enthusiasm and pride in the museum were clear. We waved goodbye as we were leaving, but he called us back, reached into his pocket, and gave us “des bonbons” (candies). 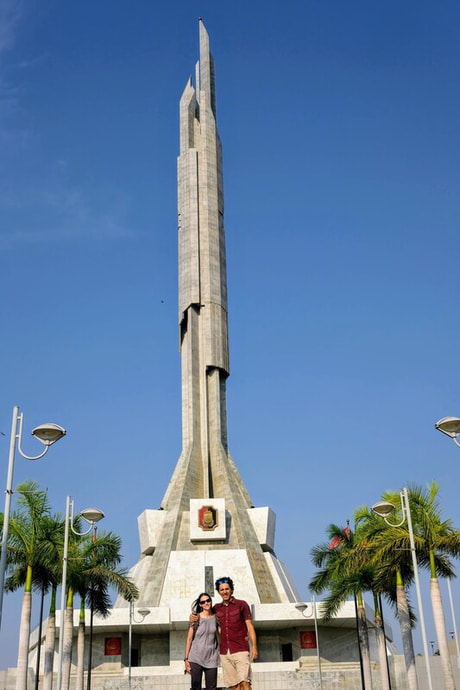 At the memorial. Photo by Mark Gallardo.
Luanda, Angola
27 May 2019
​
We wanted to take public transportation to the Memorial Antonio Agostinho Neto (Angola’s first president). We asked a man walking by where to catch the correct minibus. He didn’t simply describe which one, but walked with us to the bus, made sure we got on, and offered to come with us. We said he didn’t need to. He asked for our phone number, and later called us to make sure we made it. We were at the memorial when he called. 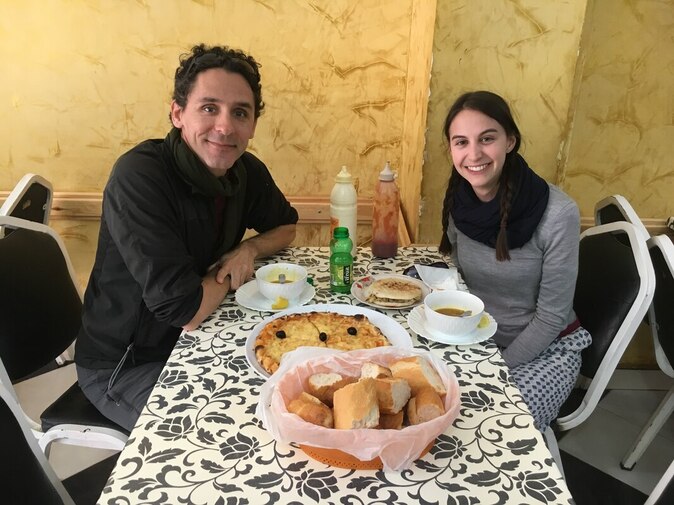 With our soup at the cafe.
Oran, Algeria
16 January 2018
​
We stopped in a cafe for lunch. The owner was so excited to have tourists in his cafe that he gave us each a bowl of soup at no charge. I took a photo of Mark with his soup to document the moment. The owner saw me taking the photo and offered to take one of both of us. This is his photo. 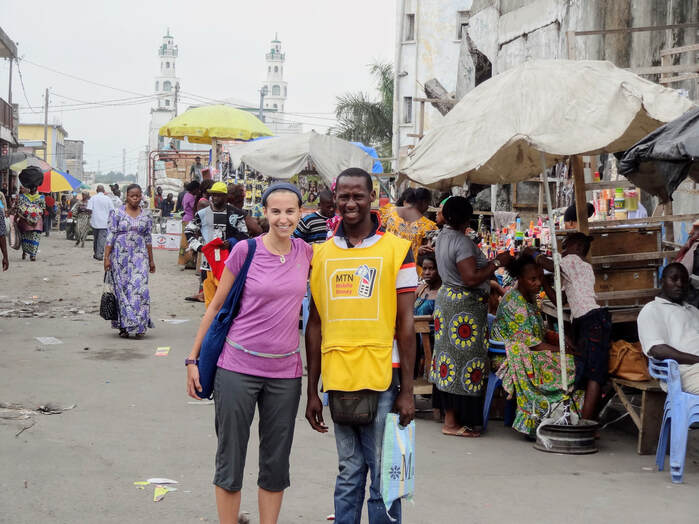 Checking out the market with Gebril. Photo by Mark Gallardo.
Brazzaville, Congo
October 2013
​
We met Gebril shortly after arriving in Brazzaville. He was from Sierra Leone, so he was happy to talk to English speakers. He was a genuinely kind person, and he helped us in many ways. For instance, he helped us get a SIM card, showed us where we could get internet, and told us about a place we could go for dinner (there weren’t many options for us as vegetarians). We were disappointed that he did not have an email address so we could keep in touch, but before we left we bought him some supplies for his small shop. 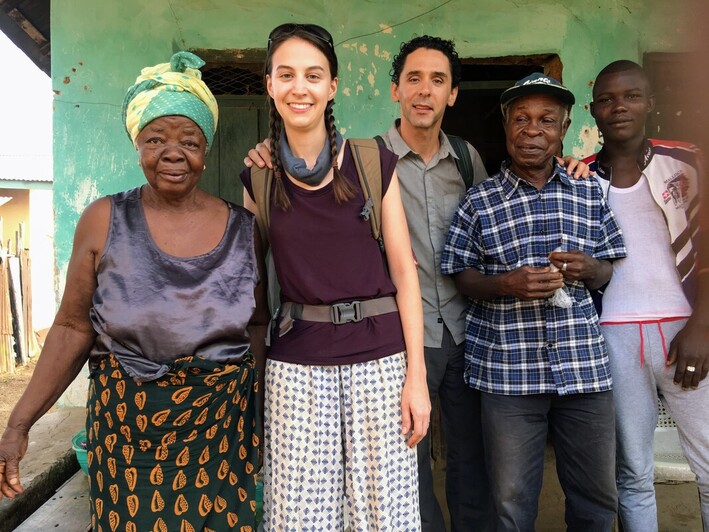 With Michael (far right) and his family.
Potoru, Sierra Leone
31 January 2018
​
We were trying to get to Tiwai Island Wildlife Sanctuary, but arrived into Potoru too late to make it that night. We had started the day in Robertsport, Liberia, and used local transportation to get there--two of us with our bags on the back of a motorcycle taxi from Liberia past an abandoned ebola treatment center, followed by an ancient land rover from the border town, over gargantuan potholes on dirt roads for several hours. It had taken longer than we’d hoped, so the boat to the island wasn’t available until the next morning. We arrived in Potoru after dark, and the only hotel was full. However, we had barely gotten out of the truck, when a young man named Michael offered to let us stay with his family. He also showed us a place for dinner, and we went with him to watch football on tv with the crowd in town. 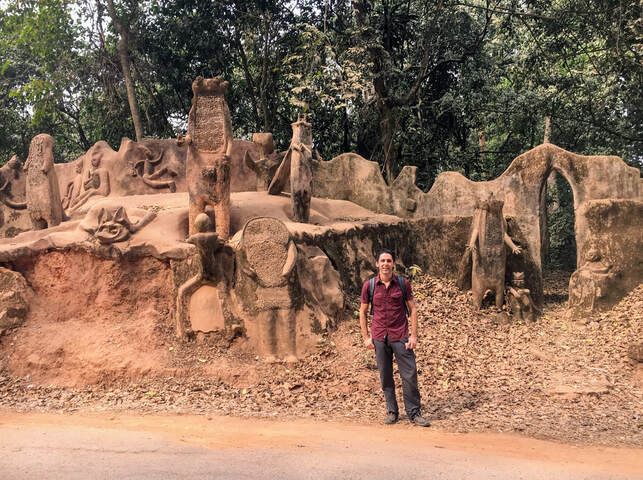 Mark at the Osun-Osogbo Sacred Grove on the outskirts of Osogbo. Photo by Elizabeth McCarthy.
Osogbo, Nigeria
24 January 2018
​
We were on the bus to Osogbo, and trying to figure out how to get to our hotel. A man on the bus with us was friendly and asked where we were going. Once we arrived in town, he walked with us—completely out of his way—to where we needed to stand to get a minibus heading in the direction of our hotel. 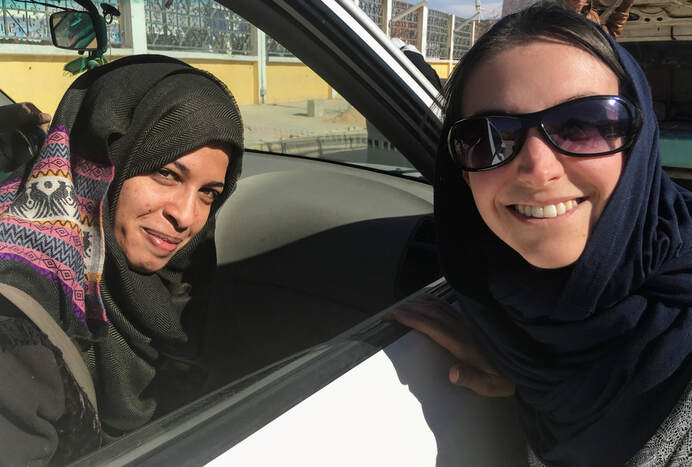 After they dropped us at the correct place. Photo by Mark Gallardo.
Touggourt, Algeria
10 January 2018
​
We were trying to get from Biskra to Ghardäia via public transportation. It required transfers between buses. We met this woman, a professor at a local university, on our first bus. Unfortunately, we never got her name. She asked where we were going. Once we arrived at her destination, a transfer point for us, she ushered us to her friend’s car, and had him drive us to the exact location we needed to be to catch our next bus--across town at an unmarked long distance taxi stand. 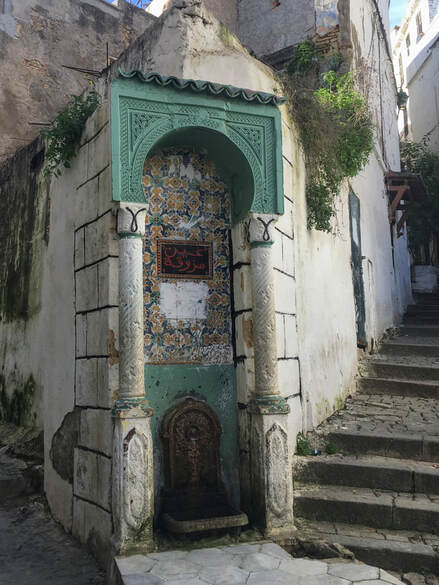 We were walking around the casbah, or ancient city center,  when we decided we wanted a snack. We went into a cafe, and didn’t recognize one of the items. We noticed a man eating it, so we asked what it was. He tried to explain, but then he gave us bites off of his! We liked it, so we got our own. Turns out it was garantita, a savory flan made of chickpea flour, which is known by many other names depending on the region. 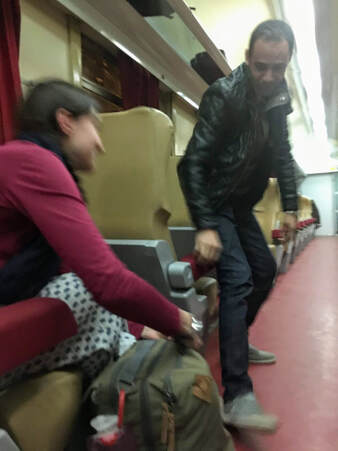 After successfully closing my bag. Photo by Mark Gallardo.
Algeria
16 January 2018
​
We were on the train from Oran to Algiers. The other passengers were almost all Algerians. I had overstuffed my backpack with food for the journey, and at one point I unzipped it to get a snack. Because it was so full I had trouble zipping it closed. As I was struggling, not one but TWO other passengers—who were not even traveling together—jumped up to help me. 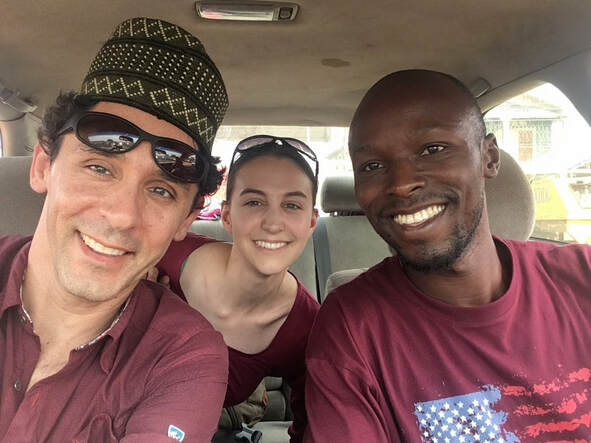 We had just finished our tour of the Benin City National Museum, and were looking for a taxi to get us to the long-distance bus station. Our guide noticed and told his co-worker, Collins (Eghosa), to drive us over. We had a great conversation on the drive. Collins was especially interested in our national museums in Washington, D.C. because of his professional training in museum studies.  Upon arriving at the station, Collins helped us secure tickets on the shared-taxi and then refused to leave until he was sure our go-when-full transport had actually departed the station.  This occurred about 2 hours after arriving. During that time we shared stories about our homes, our families, and our future dreams, with much laughter and respect. To our great surprise, before our transportation pulled away, he reached up and took the hat off his head, offering it to Mark as a parting gift. At first Mark refused--it was such a large gift from someone we had only known for a short time--but eventually he decided to accept this gesture of kindness.