On my first trip to India I was focused on getting to know the great historical and spiritual cities and sites.  However, in planning the trip I had never heard of the ancient town of Orchha in the northern state of Madhya Pradesh.  Although it had some great, albeit worn down classical northern Indian architecture, it was a largely forgotten stop for tourism.  The plan was to stay just a night or two.  On arriving it was immediately clear that the locals, who were extremely friendly and curious about western travelers, were unused to tourism. In the first few minutes of being there I noted one dignified and mysterious old man with a bright shine in his eye who kept on speaking to me in Hindi (a language I did not understand).  I remember his long, regal white hair and beard and his proud yet humble and playful energy. Pretty soon he had the local men translating for him. I was amazed by how interested he was in getting to know me. He was so curious about my family, my home, my interests.  Soon he had invited me to his home which turned out to be a kind of lean-to built onto the back of a building.  I learned that he had no local family but that his sons sent him money for rent.  He was a retired high level Indian rail worker and also a poet.  He shared and read his published volumes of poetry (none of which I understood) and I loved his passion and enthusiasm despite the absence of a translator. Soon he was giving me cooking lessons as we prepared puri (a kind of oil fried tortilla) on his cement floor.  Our meal was humble but wonderful and delicious.  It felt so natural for him hugging me and laughing with me as we used hand signals and drawings in order to communicate with each other.
​
As I came back to visit him over the course of my time in Orchha we grew closer and, incredibly, I began to regard him a dear friend who was almost like a grandparent to me.  In preparing to move on with my travels I remember him coming to tears and requesting to see my journal.  His goodbye gift to me was a poem he wrote for me in Hindi directly into my book. One day I will have that poem translated, but in all the years that have passed since that day, I’ve enjoyed holding onto the magic of what I think he wrote, of what I remember of that very special friendship that we shared.
​     -Mark 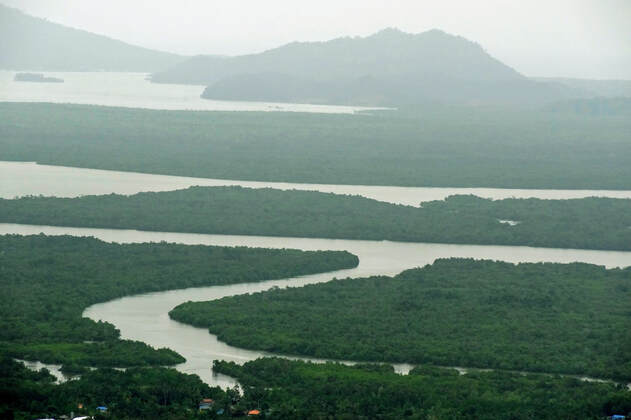 Amanda and I were visiting Kubah National Park, but we knew we would not be ready to leave by the time the last bus back to town left. The ranger at the entrance to the park told us to come back at 5 pm, and he would call a taxi for us since we did not have functioning cell phones. We returned to his station before 5, but he had already left! Luckily some men were sitting nearby, and one of them called a taxi for us.
-Elizabeth 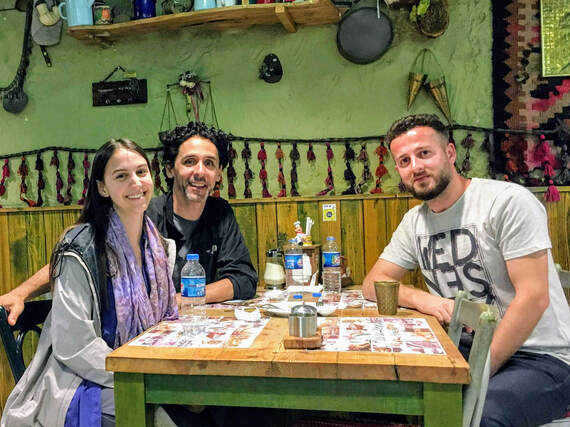 Out to dinner at a Syrian restaurant in Erbil.
Erbil, Kurdistan (located in northern Iraq)
11 May 2019

Upon arrival at our hotel in Erbil, one of the front desk workers was excited we spoke English so he could practice. He became friendly with us. Mark ended up spending a couple hours helping him with his English language resume. The three of us also went to dinner together one night, and he showed us around town after we ate.
-Elizabeth 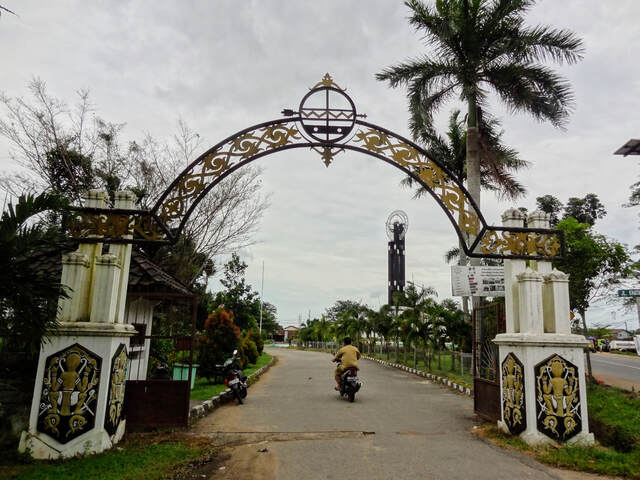 My friend Amanda and I wanted to buy bus tickets from Pontianak to Kuching, Malaysia on the island of Borneo. We got ourselves to the correct area, but the first company we tried did not have any regular (cheap) tickets left. Instead of convincing us to buy her more expensive tickets, the ticket agent pointed us across the street to a competing company she thought would have some. They did, so we got the tickets we wanted.
-Elizabeth 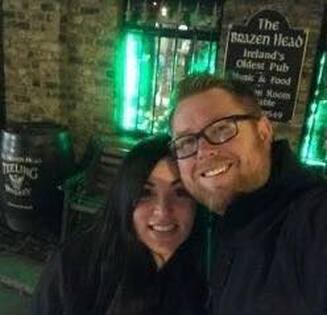 My husband and I were traveling in Ireland for our Honeymoon January of 2018. We were in Cork and I broke my tooth. Had to get up very early in the morning to go to their Emergency Dental clinic as it was first come first serve. The man ahead of us not only gave me his spot in line so I could be first and be seen as I was in so much pain but then gave us a ride back to our hotel. Super nice older man. Wouldn’t accept any money and just loved the conversation and company.
-Kaitlyn Elyse 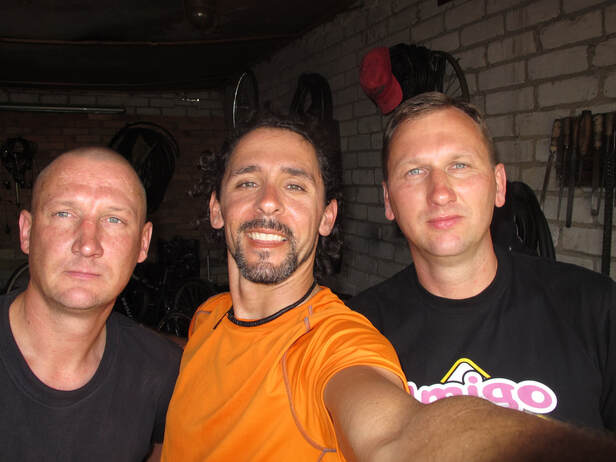 With the brothers who repaired the bicycle. Photo by Mark Gallardo.
Lithuania
​11 July 2011

In the summer of ‘11 I was primarily involved with a humanitarian project I had dreamed up. It was a fundraising event to generate  money to be used as micro-credit loans for women’s small businesses in Myanmar (Burma). The idea was that I would ride my bike across Europe as well as hike across the highlands of Scotland and blog/email about it.  The hope was that people would sponsor the miles I had traveled and the money generated would be donated to a non-profit working in Myanmar with whom I was affiliated.
​
The trip started in England from where I flew to Poland to start cycling.  My friend in London had loaned me his newly tuned-up bike and I was off. Everything went well for the first couple of weeks through Poland and Belarus, although there were some amazing thundershowers that made the trip a bit more colorful.

When I came to Lithuania, however, I encountered an obstacle that I could not handle: the bike began to break down (particularly the crankshaft was starting to loosen and click, threatening to come undone all together and render the bike unusable).  I had the equipment and knowledge for basic bike repair, but nothing to handle a catastrophe of this magnitude. Deep in the rolling forest of southern Lithuania, I pulled over into the only gas station around. In fact it was the only building of any type I had seen for many miles.  There was a young man working behind the cash register and I struck up a conversation with him as I bought a drink. His English was amazing and he showed such enthusiasm for my project. When I explained about the bike breaking down, he thought about it and said he knew of a pair of brothers in the next city who ran a bike repair shop out of their garage. He gave me directions (without any road names: go 5 kilometers to the village, then go left, then straight past two intersections, then right for two blocks…then right again, then you will see a small pink toy bicycle on a pole low to the ground in the front yard of a home in a residential neighborhood...then walk up to the garage and knock).

I was very dubious as to whether this plan would work out but desperate as I was, I went for it.  Sure enough I found the pink bicycle toy indicating the shop and went up and knocked on an otherwise unmarked garage.  When two rather intimidating men rolled up the door and greeted me in Lithuanian I pointed to the bike and they immediately understood and started working on it.  I spoke no Lithuanian and they no English. As one of the brothers worked I showed the other photos of the humanitarian project and pantomimed what I was doing and why.  All of a sudden a light went on in his eyes and he smiled brightly as he understood why I was riding my bike across his country. Without a moment’s hesitation he then used the only English I ever heard him speak: “No charge” he said and smiled at me.  He then explained to his brother who completely agreed. As they sent me on my way I was overcome with an incredible sense of gratitude, joy, and humility. Wiping the tears as I smiled and pedaled my way over the next kilometers, I knew that one day I would not only have a beautiful story to share but a magnanimous act to emulate.
-Mark 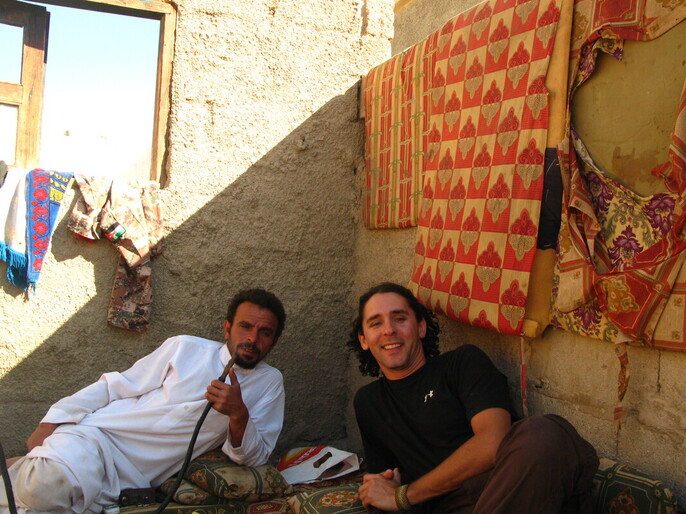 With Mohammed at his house.
Amman, Jordan
December 2007

Near the end of 2007 I was traveling all around the Jordan region, including Lebanon and Syria and Egypt.  Amman, Jordan, became my hub to return to when tired and in need of friends. The friends were two young and amazing men who had adopted me into their families. Our relationship started when I was visiting ancient fortresses outside of Amman where public transport was sparse. At one point I was stranded at a gas station and the manager convinced the first patron in to drive me to my next destination.  That was Abdul. From that moment on we were fast friends and he and his best friend repeatedly welcomed me into their homes, drove me around Jordan, shared meals with me, and made me feel more welcome than I could ever remember. When they realized that Christmas was near they drove me over 30 miles to a small Christian village just so that I could see a Christmas tree and feel at home. The suit I am wearing in the photo was one of theirs that they were lending me for a New Year’s Eve celebration.  Truly lovely men.
​     -Mark 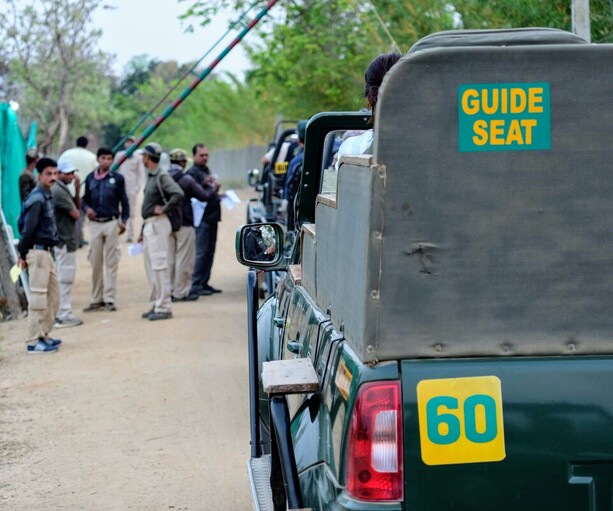 Waiting at the gate to enter the park. Photo by Mark Gallardo.
Madhya Pradesh, India
25 April 2019
​
We were in our safari vehicle outside Pench Tiger Reserve, waiting for it to open. There was a boy walking around selling chai. It cost 10 rupees per small cup, but we only had 500 rupee notes (about 7 USD), and he didn’t have change. He gave us two cups for free. We asked around among the other tourists, mostly Indians. No one could break a 500 INR note. However, an Indian tourist gave us the money to pay him. 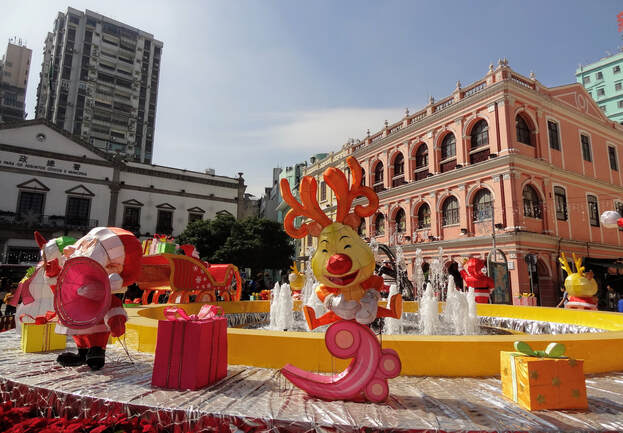 I was traveling with my friend Amanda, and we had taken the ferry from Hong Kong to Macau for a day trip. At the end of the day, we had trouble figuring out how to get the right bus back to the ferry terminal. Eventually we ended up at a hotel, where the man running things said we could take the hotel bus to the terminal free of charge.
-Elizabeth